You are here: Home / Healthy Food / ▷What do Beets Taste Like? Things You Should Know About It

What do Beets Taste Like? Things You Should Know About Beets

What do Beets Taste Like? Some ingredients have an unexplainable flavour. That’s why we use our creativity to combine and create flavours that could be used in our recipes. One of the misunderstood root vegetables and ingredients is beet. 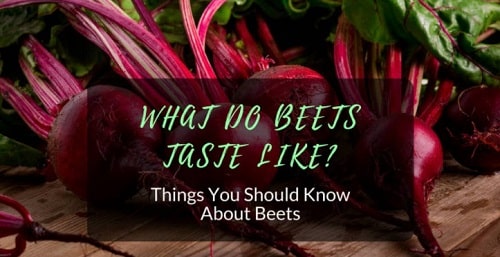 Beets are believed to taste like dirt. That’s why people are in doubt when using them in their recipe because of their rich earthy flavour. So the question is, what do beets taste like, and why do they taste that way?

What Affects the Earthy Taste of Beets?

Beets are rich in geosmin, a compound produced by microbes in the soil. This is why its taste and smell are similar to freshly plowed dirt or a field after a rainstorm. This is why some people are sensitive to this smell on some of the foods it’s mixed with. Many don’t like this flavour, but some people love it.

People are mistaken when they see that beet has the taste of dirt, but they’re not aware that it’s the compound that is intertwined with the beets that give the earthy taste. Other vegetables share this quality, including lettuce, spinach, and mushrooms. What you taste is the geosmin compound, and it can’t be easily washed away.


Many people associate the beet’s taste to dirt; others would describe it as earthy. In Australia, it’s common for a hamburger has a thick slice of beet in it. But in America, it’s not a favourite item. But did you know that European scientists in the Napoleonic era turned the beets as a source of sugar? So, some beets nowadays are bred for their sugar source potential.

Beets may have dirt or earthy flavour, but there are qualities in beets that you can use in cooking. Pair the beets with proper components so you can bring out the sweetness it has.

Why are Beets Hard to Sell?

Beets don’t sell that much, especially when it’s raw. They have an unappealing look, and if you are a regular shopper, you might say that it has gone wrong. It has stringy, long white tendrils coming from its sides. It has a brownish colour that leaves people with a poor impression. However, if you cut the beet open and peel the ugly outer skin, you will have a colourful and glossy garnish. You can use a beet peeler to remove the nasty layer.

We shouldn’t judge a vegetable by its aroma because its actual flavour is not dirt. Most Americans have their first experience of beet as a canned product. If you only use buy beets as canned goods, then you miss out on its wonders.

What are The Cooking Methods You Can Do to Change Beet’s Tastes?

Cooks are creative people, and if you aspire to be one, you should have the creativity to make creative dishes, especially if it involves beets. There are many unusual ways to cook beets, and there are particular foods that taste incredible when beets are correctly added to them.

For example, the chicken won’t taste that good if you leave it in the oven until it’s cooked; salmon would taste bad if lemon is not added. Beets are somewhat the same. Your way of preparation will change its taste. You can roast, boil or steam beets, or eaten raw. Each method will change how beets will taste like.

When you roast the beets, you will achieve a more concentrated flavour. The beets will become tenderer like a potato, and its sweeter flavor will be emphasized. Boiling the beets will give you a more subdued flavour that makes them ideal for meat dishes inclusion. You can also mash the beets to mix with hummus, smoothies and cookie dough. The fastest way to cook beets is through steaming. The earthy flavor might be retained, but you can eliminate it by mixing coconut oil.

What Herbs to Use with Beets?

Preparing your beets with herbs can also make a big difference in the beet’s flavours. In addition, properly seasoned beets might change people’s perspectives on them. First, however, you should select the proper herbs that will help offset beet’s robust flavor.

To tone down the beet’s flavour, use basil. Boiled beets complement well with chives. Robust seasonings like ginger, cloves, cumin, fennel, and allspice help to subdue the beet’s active profile.

What are Healthy Dishes that Highlights Beets?

Like I said earlier, beet’s flavour can be changed when cooked well or complemented well with herbs. So if you can’t imagine putting beets on your dishes or meals, you should now because there are amazing dishes that complement well with beets.

You can try preparing beet hummus. It’s an excellent start for beginners who are beginners when using beets in their recipes. Beet salad is another recipe that will help you adjust to the taste of the beets. Once you prepared it correctly, you can bring out the sweet flavour of the beets.

Those are the two dishes you can start to make if you’re not a beet fan but wants to know how it tastes beyond its misunderstood earthy flavour.

Beets might not be for everyone, especially that we have different tastes. The thing is, there are a lot of health benefits you can get from beets.

Beets have nitrates which are converted into nitric oxide that helps relax our blood vessels. The beet juice is rich in nitrates which help lower our blood pressure. It improves the blood flow in a matter of hours.

Beet juice can also improve your stamina, especially when you want to prolong your workout routine. Not only the nitrates lower blood pressure, but it also enhances someone’s tolerance to high-intensity exercises.

Beet is also an excellent source of betaine. It protects proteins, cells, and enzymes from environmental stress. According to World’s Healthiest Foods, it fights inflammation, improves vascular risk factors, and protects internal organs.

There are many amazing things you can get from beets, and when it comes to beet preparation, all it takes is a proper cooking method and herbs to change its taste. But if you want to retain its earthy flavour, you can still opt to do that.

There are more things I want you to learn about beets, but I hope you learned enough from this article. Beets taste earthy because of their compound, but you can cook them in ways that will yield delicious flavours. Share this information with others so that beets won’t be stereotyped vegetables anymore. If you have questions, ask us right away. [1]